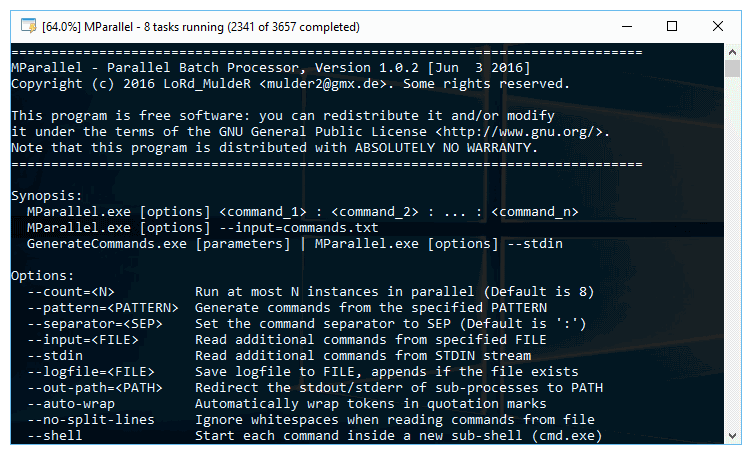 Introduction
MParallel is a batch processor with multi-threading support, i.e. it will run multiple tasks in parallel. This can be very useful, not only, to take full advantage of multi-processor (multi-core) machines.

Synopsis
MParallel can be invoked in three different forms:

The first form takes commands directly from the command-line, delimited by colon characters. The second from reads commands from a text file, line by line. And the third form reads commands from the standard input stream (stdin), which is typically used to process the output from another program using a pipe (|). The three forms can be combined freely.

Examples
The best way to get started with MParallel is looking at some examples:

Note how the distinct commands and their related arguments are delimited by colon characters. Also note how the command-line options specific to MParallel have to go before the very first command string.

Note that, in this example, the {{0}} placeholder will be replaced with the corresponding command tokens.

Example 3
It is also possible to read your commands (or the parameters for your command pattern) from a text file:

Example 4
Now let's read the output of the "dir" command to copy all "*.jpg" files in the current directory to "*.png":

Note that here we need to use the --shell option, because copy is a built-in shell function. Also note that we would need to add --no-split-lines and --auto-wrap in order to correctly handle file names containing spaces!

More Examples
Please refer to the included Example_1.cmd script for an in-depth MParallel example on how to convert all JPEG files in a directory to the PNG format, in parallel, using ImageMagick. You will need ImageMagick for Windows.

Also, refer to the included Example_2.cmd script for an in-depth MParallel example on how to convert all AVI files in a directory to the MP4 format, in parallel, using FFmpeg/Libav. You will need FFmpeg builds for Windows.

The PATTERN string should contain placeholders in the {{k}} form. Placeholders of that from will be replaced by the k-th command-token. Note that the placeholder indices k are zero-based, i.e.use {{0}}, {{1}}, {{2}} and so on. In addition, if the k-th command-token represents a valid file path, the placeholders {{k:F}}, {{k}}, {{k}}, {{k:N}} and {{k:X}} will be replaced with the file's full path (expanded relative to working directory), drive letter (with trailing colon), directory name (with trailing backslash), file name (without extension) and extension (including dot), respectively.

--separator=<SEP>
Set the command separator to SEP. The separator string is used to delimit the distinct commands, when they are passed to MParallel on the command-line. By default, a single colon character) is used as separator, but any suitable character sequence may be specified here. Note that SEP is not used for reading commands from a file or from the STDIN. When reading from a file or from the STDIN, there must be one command per line.

--input=<FILE>
Read additional commands from the specified FILE. The specified FILE needs to be a plain text file, containing one command per line. Each line is interpreted like a full command-line. Using separators within a line is not required or supported, because commands are delimited by line breaks. If the file contains any characters other than plain US-ASCII, it is expected to be in UTF-8 text encoding by default. Use the option --utf16 in order to force UTF-16 encoding.

--stdin
Read additional commands from the STDIN stream. The data on STDIN needs to be plain text, containing one command per line. Each line is interpreted like a full command-line. Using separators within a line is not required or supported, because commands are delimited by line breaks. If the stream contains any characters other than plain US-ASCII, it is expected to be in UTF-8 text encoding by default. Use the option --utf16 in order to force UTF-16 encoding.

This option is typically used to process lines produced by other programs or by shell functions. In the shell (cmd.exe) the STDOUT of another program can be "connected" to the STDIN of MParallel using a pipe operator (|). Note, however, that shell functions like dir may not output UTF-8 by default. Set the shell to UTF-8 mode (chcp 65001) in advance!

--logfile=<FILE>
Save logfile to FILE. The logfile contains information about all processes that have been created an the result. By default, no logfile will be created. If the logfile already exists, MParallel appends to the existing file. Log output format is:

--out-path=<PATH>
Redirect the STDOUT and STDERR streams of each sub-process to a file. MParallel will create a separate output file for each process in the PATH directory. File names are generated according to the YYYYMMDD-HHMMSS-NNNNN.log pattern. Note that directory PATH must be existing and writable. Also note that all redirected outputs do not appear in the console!

--auto-wrap
Automatically wrap all tokens that contain any whitespace characters in quotation marks. This applies to the expansion of placeholders, when the --pattern option is used. For example, if the N-th command token contains foo bar, then {{N}} will be replaced by "foo bar" instead of foo bar. This option has no effect, if --pattern is not used.

--no-split-lines
Ignore whitespace characters when reading commands from a file. By default, when MParallel reads commands from a file or from the STDIN stream, each input line will be processed like a full command-line. This means that tokens within each line are whitespace-delimited, unless wrapped in quotation marks. If this option is set, no command-line splitting is performed on the input lines. Instead, each input line will be treated like one unbroken string.

--shell
Start each command inside a new sub-shell (cmd.exe). Running each command in a new sub-shell implies a certain overhead, which is why this behavior is disabled by default. However, you must use this option, if your command uses any built-in shell functions, such as echo, dir or copy. You also must use this option, if your command contains any shell operators, such as the pipe operator (|) or one of the redirection operators (>, <, etc).

--timeout=<TIMEOUT>
Kill processes after TIMEOUT milliseconds. By default, each command is allowed to run for an infinite amount of time. If this option is set, a command will be aborted if it takes longer than the specified timeout interval. Note that (by default) if a command was aborted due to timeout, other pending commands will still get a chance to run.

--priority=<VALUE>
Run the commands (sub-processes) with the specified process priority. This can be one of the following values:

Note that this option is mutually exclusive to the --out-path=<PATH> option. That is because, when output redirection is in effect, the detached console windows would just end up being completely blank.

--abort
Abort batch, if any command failed to execute. By default, if any command failed, e.g. because the process could not be created or because it returned a non-zero exit code, other pending commands will still get a chance to run. If this option is set, the whole batch (queue) will be aborted, as soon as one command has failed.

--discard-output
Discard the STDOUT and STDERR streams of any sub-processes. This means that any sub-process outputs will neither be visible in the console, nor will they be saved to a file. This option is mutually exclusive to the --out-path option.

--ignore-exitcode
Do not check the exit code of sub-processes. By default, MParallel checks the exit code of each sub-process. It assumes that the command has failed, if the process returned a non-zero exit code. If any command failed, this will be reported and, if --abort is set, any pending commands will not be executed. Setting this option causes MParallel to ignore exit codes. However, a command is still considered to have failed, if the processes could not be created.

--notify
Play a notification sound, as soon as all commands have been completed (or failed) and MParallel is about exit.

--silent
Disable all textual messages, also known as "silent mode". Note that fatal error messages may still appear under some circumstances. Also note that this option is mutually exclusive with the --trace option.

--no-colors
Disables colored textual output to the console. By default, when MParallel is writing textual messages to the console window, it will apply the appropriate colors to them. Colors are always disabled when redirecting STDERR to a file.

--trace
Enable more diagnostic outputs. This will print, e.g., the full command-line and the exit code for each task, which can be helpful for debugging purposes. Note that this option is mutually exclusive with the --silent option.

Configuration File
Optionally, MParallel can read default options from a configuration file. Any options read from the configuration file will override the "built-in" defaults. However, options passed on the command-line will always have precedence!

The configuration file may contain any MParallel option that is available on the command-line. It should start with a single [MParallel] header line (any lines before the header are ignored!) and, from that point on, contain one option per line. Options are specified in the <name>=<value> format. However, the -- prefix is neither required nor allowed.

Note that if the configuration file contains any characters other than plain US-ASCII, it is expected to be in UTF-8 text encoding. Also note that boolean options can be overwritten using the --some-option={0,1} syntax.

Example
A simple configuration file may look like this: